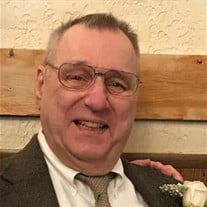 Gerald John Gorski, of Summit, Illinois passed away Sunday, August 8, 2021. He was born in Chicago, IL and was raised at 25th & California where he attended St. Roman’s Catholic Church and then St. Rita High School. Jerry proudly served in the US Navy as a Machinist Mate 2nd class on board the USS Bache DDE-470 during the Cuban Missle Crisis. He loved telling "sea stories" and was proud of being a Tin Can Sailor. After completing his military service, Jerry met Phyllis Dappen. They married during the great blizzard, February 4, 1967. Their married life of 54 years has been full and abundant. Jerry made his living as a commercial heating and refrigeration engineer and was a proud member of Pipefitters Local 597. When being in the city of Chicago with his children, he would always show them with immense pride all the buildings he worked on thru his career. Jerry and Phyllis settled in Summit in 1972 where they still reside today. Jerry spent many years contributing to the local community by serving several years for the Summit Volunteer Fire Department and coaching baseball in ASBB. He was very proud of his greatest contribution by serving on the School Board of District 104 for over 20 years. It was the School Board where he utilized his business ethics to advocate for the students of the district. He led several contract negotiations where was known for his integrity and his focus on improving the education of the students. Helping people was one of his greatest qualities. An encyclopedia of knowledge, he was always called upon for a faulty air conditioner or furnace, plumbing, life advice etc. No matter the problem, he had an answer. Family was his heart as Jerry spent his lifetime educating his children and grandchildren on topics like gardening, fishing, and cooking. He was an avid reader of history and thoroughly enjoyed traveling with his wife. He and Phyllis attended hundreds of baseball, basketball, hockey, volleyball, football and other games. They rarely missed a concert, play or recital. Gerald is preceeded in death by his parents John and Angeline (Cygal) Gorski. Jerry is survived by his wife of 54 years, Phyllis (Dappen)., their three children, Jackie, Andrew (Paula), and Brian (Andrea). A proud, funny and most loving grandpa, his pride and joy are seven grandchildren Emily, John, Andrew, Elizabeth, Joseph, Brian and Olivia. Jerry is survived by his sister Judy Gorski (Fred Meyer) , their daughters Sarah (Aaron) and Rachel, his brother in law Ed Dappen, and Ed’s children David (Veronica) Dappen and Phyllis (Steven) Suntrup and sons Steven and Thomas. Visitation on Thursday, August 12, 2021 from 4 PM to 8 PM at Foran Funeral Home, 7300 W. Archer Ave. (55th street just west of Harlem). Visitation of Friday from 8:30 AM until time of Prayers at 9:30 AM at the funeral home. We will go in procession from the funeral home to St. Joseph Church for a 10 AM Mass. Cremation Private. Please send your thoughts and condolences to Gerald’s family on his personal tribute website at www.foranfuneralhome.com

The family of Gerald John Gorski created this Life Tributes page to make it easy to share your memories.

Send flowers to the Gorski family.