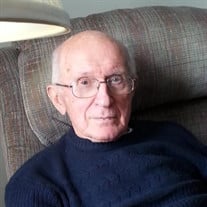 Harvey E. Wayne - husband, father, brother, grandfather, and great grandfather died September 21st at home, surrounded by love, at the age of 95. Harvey was father to 4, grandfather to 7, great grandfather to 5. Harvey was married to Betty Wayne (nee Burke) for 50+ years. Betty preceded him in death in 1996. They had 4 children, Rita (Robert), Robert (Marge), Bernadette (Steve), and Michael (Deirdre). Harvey and Betty were longtime residents of Chicago's Garfield Ridge neighborhood. “Pa” was born on February 23, 1924 in a house on Ashland Avenue. He attended Tilden High School. During WWII, he served in the 36th Infantry Division of the United States Army - earning a Purple Heart. He worked as a drafting engineer. Harvey loved bowling (career high game: 288), pitching horseshoes, Chicago sports, and eating sour cream potato dumplings for his birthday. He drove Chevys, Fords, and Buicks, woodworked as a hobby, and knew his way around a set of tools. He had exquisitely neat handwriting, valued accurate measurements in all things, and never missed a small detail. He was dedicated to his faith having been a parishioner at St. Daniel the Prophet for 70 years. He attended Mass regularly until he was no longer able. A one-hour visitation in remembrance and celebration of Harvey's life will be held on Wednesday, September 25th at St. Daniel the Prophet Church at 10 AM. To be immediately followed by a Mass of Christian Burial at 11 AM. Interment at St. Casimir Cemetery. Donations to the St. Daniel the Prophet St. Vincent de Paul Society in Harvey’s name are welcomed and appreciated.

The family of Harvey E. Wayne created this Life Tributes page to make it easy to share your memories.

Send flowers to the Wayne family.