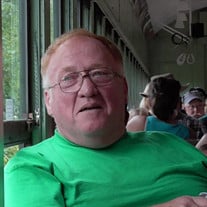 John Thomas Ryan, loving husband, dedicated father, doting grandfather, loyal brother, and truehearted friend drew his last breath on February 27,2020. John died peacefully at home, surrounded by his family after courageously battling stroke-related complications since December of 2018. John ( Jack or Red) was born on the Southwest side of Chicago in 1946 to Clement and Bertha (Fuerst)Ryan. He was a lifelong Chicagoan and graduate of St. Rita High School (1964). John retired from the Chicago Police Department in 2005 after 35 years of distinguished service. During his early career, he was a semi-professional wrestler and bona-fide health enthusiast who jogged tirelessly around Marquette park every evening before dinner. John was a longtime resident of Garfield Ridge neighborhood, where he was involved in both religious and civic organizations, including St. Daniel the Prophet Parish and the Garfield Ridge Neighborhood Watch. John was gregarious and outgoing, always quick with a joke or witty retort to make you smile. During his retirement, John pursued many interest, co-hosting the local radio program, “Meet the Chicago Historians,” and emceeing the all railroad radio program, “ Chicago Junction.” John was a devout Catholic, staunch conservative, history hound, political connoisseur, movie buff, comic book collector, trivia fanatic and unwavering White Sox fan. John is preceded in death by his parents, Clement and Bertha, along with his sister Joanne. He is survived by his loving wife, Deanna (Jones), who has been by his side since they married in 1970. John considered his family his greatest legacy, and leaves behind two beautiful daughters, Jennifer and Michelle ( Sean Corry), and amazing grandsons John and Patrick Corry. His brother, Robert, will carry on his tradition of watching Jeopardy in the afternoons and reminding the kids of the “ good ole days” at family gatherings. Visitation is Tuesday, March 3, 2020 from 3 PM to 9 PM at Foran Funeral Home, 7300 W. Archer Ave.(55th street just west of Harlem).Visitation on Wednesday is from 10 AM until time of Prayers at 11:30 AM at the funeral home. We will go in procession to St. Rita Cascia Shrine, 7740 South Western, Chicago, Illinois 60620 for a 12:30 PM Mass of Christian Burial. Interment St. Mary Cemetery. In lieu of flowers, please make donations in John’s memory to the Chicago Police Memorial Foundation or Catholic Charities of Chicago.

The family of John Thomas Ryan C.P.D. created this Life Tributes page to make it easy to share your memories.