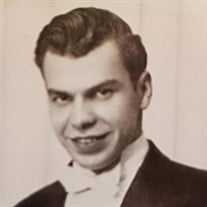 It is with broken hearts we announce the passing of Joseph Thomas Lakatos, affectionately known as “Tom” to his family. He was the beloved husband of Frances G. Lakatos, cherished Dad of Tina and devoted grandfather to Tommy and Andrea. Tom loved his family with complete devotion and always made sure that despite any hardships, he provided what was needed to keep his family safe. A loving, kind, compassionate and fun loving man, his pride and joy in life was always his wife, daughter and grandchildren. He was caring, playful and devoted to his family. The love and life lessons he provided will always remain a part of them. He was extremely helpful to everyone he encountered, especially to his parents, his wife’s parents, and siblings, and to anyone who needed him. A man of integrity, Tom always kept his word. Everyone valued his brilliance, laughter, generosity, wisdom, mentoring, honesty and love. Born on April 28, 1925 in West Aliquippa, PA. to Mary Margaret and Michael Lakatos. He was the second child of three, he had an older sister, Anna and a younger brother, David. Growing up, Tom had many friends and played baseball and loved football. He attended Weir High in Weirton, West Virginia and after graduation, enlisted in the Navy/Coast Guard during WWII. He served in the Pacific, Atlantic and Middle East campaigns from 1943 to 1946. Because of his many talents, he received many acclamations and certifications, including but not limited to evaporator, oiler, fireman, plumber, watertender etc. Upon his Honorable Discharge in 1946 and return home, a friend introduced Tom to the “love of his life”, Frances. After a whirlwind courtship they were married on October 28, 1946 and shortly thereafter, moved to Chicago. Tom worked for Danly Machine Corporation for over 30 years, building heavy stamping presses, then being promoted to foreman and ended his career working as a field installer for the heavy machines on site at large corporations including Ford, GM, Cadillac, and many other companies around the U.S. Upon his retirement Frances and Tom enjoyed traveling the United States, especially the western states. Tom enjoyed playing in a golf league from work where he won many tournaments and trophies. He also enjoyed woodworking, repairing cars, bowling, visiting with family and friends and enjoying time with his grandchildren. He is preceded in death by his wife of 60 years, Frances who died in 2006, his brother, David Lakatos in 2007, his sister, Anna Vohar, his parents, Mary Margaret and Michael Lakatos, his parents in law, Matthew and Marianna Dziatkowicz. More recently two nephews, Andrew Kasper (2005) and Michael Diaziatokwicz, and many brothers and sisters-in-law. He is survived by his daughter, Tina, grandchildren, Tom and Andrea, sister-in-law, Jackie Lakatos, his nieces and nephews, Lisa Lakatos (Colin) Moffat, Lisa's dtr: Mikhaila Lakatos, Nick Lakatos, Jeffrey Lakatos and his children, Alex, Zachary and Mason Lakatos. Leslie Lakatos Rupas (Zac). Robert Hurtuk and his children, Jennifer, Megan, Sara, Amy, Emily and their children. Jan Gergitz, Gregory and Christine Hurtuk and their children, Michael and Steven Hurtuk. Stanley Kasper, and (deceased: Andrew's wife) Lorelei Kasper and their dtrs, Jessica, Kelly Ann and Amberly Kasper. The following nieces, nephews of Tom's brother in law in WV: Michael (Nikki), Richard, George (Sherree), Mark (Cathy), William (Prudence) Dziatkowicz; her three daughters, Peggy Thomaselli (Bob), Maureen Kerr (Doug), and Celeste Dziatkowicz; thirteen grandnieces and nephews , Josh (Kathryn) Thomaselli, Heather (John) Baker, Michael Dziatkowicz, Melorie Butto, Brent and Doug Kerr, Samantha (Bill) Hamilton, Dylanna (Joe) Sadler, Victoria and Aidan Dziatkowicz, Alexis (Joey) Littleton, Makenna (fiancé Cameron Rauch) Dziatkowicz, and William Dziatkowicz; five great-grandnieces and nephews, Ryder Thomaselli, Hannah and Hadley Baker, Jacob and Nevaeh Butto. The Bzdyk, family Janin, Beata, Deniel, Claudia, Diana, Derek, Joey, Ela and Oliver,. The Kois family, Josie, John, Anna, Margaret, Rick and their children. Ted and Mary Kois. Stella and Walter Kielbasa and their children and grandchildren. Tom also was treated very kindly by an extended family member of the Bzdyk family, Sandy. There are so many people who are so special and for anyone not named, sincere apologies, but know that each and every one of you, family and friends were highly valued and loved, and will continue to be cherished by our family. Above all else he was devoted to his family, in which he took boundless pleasure and pride. Tom was also a devout Catholic and prayed the Rosary a couple of times a day. He will be remembered as a loving and supportive husband, father, grandfather, a kind and gentle person, a decent and honest human being who was always cheerful, always courteous and respectful, always brave and strong. Tom will be dearly missed and forever loved. The world is a better place because of him.

It is with broken hearts we announce the passing of Joseph Thomas Lakatos, affectionately known as &#8220;Tom&#8221; to his family. He was the beloved husband of Frances G. Lakatos, cherished Dad of Tina and devoted grandfather to Tommy and... View Obituary & Service Information

Please offer your thoughts and condolences to Joseph's family.

It is with broken hearts we announce the passing of Joseph Thomas...

Send flowers to the Lakatos family.