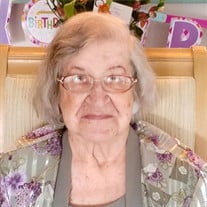 Victoria Patrylak graced this earth for 102 years and passed away peacefully on Sunday, April 3, 2022. She and her late husband, Joseph Patrylak were former residents of the Lawndale neighborhood of Chicago, Illinois. Victoria was the loving... View Obituary & Service Information

Please offer your thoughts and condolences to Victoria's family.

Victoria Patrylak graced this earth for 102 years and passed...

Send flowers to the Patrylak family.